The IBM Personal Computer, commonly known as the IBM PC, is the original version and progenitor of the IBM PC compatible hardware platform. It is IBM model number 5150, and was introduced on August 12, 1981. The generic term “personal computer” was in use before 1981, applied as early as 1972 to the Xerox PARC’s Alto, but because of the success of the IBM Personal Computer, the term “PC” came to mean more specifically a desktop microcomputer compatible with IBM’s PC products. Within a short time of the introduction, third-party suppliers of peripheral devices, expansion cards, and software proliferated; the influence of the IBM PC on the personal computer market was substantial in standardizing a platform for personal computers. “IBM compatible” became an important criterion for sales growth; only the Apple Macintosh family kept significant market share without compatibility with the IBM personal computer. 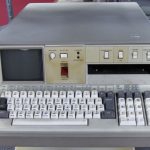